But in extensive private talks, Russian President Dmitry Medvedev
laid out clear limits on what Russia would accept in punishing Iran for
its nuclear program. A senior Kremlin aide all but ruled out one of the
most potent weapons that hawks in the U.S. want to include in any
international sanctions: gasoline and other refined petroleum products. 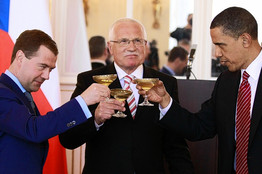 "A
total embargo on deliveries on refined oil products to Iran would mean a
slap, a blow, a huge shock for the whole society and the whole
population," said Sergei Ryabkov, Russia's deputy foreign minister.
"These types of things that shock the fundaments of a society or country
are something that we definitely are not prepared to consider."


The intense negotiations, which took up much of Mr. Obama's 85-minute
private session with Mr. Medvedev, underscored how intertwined the
array of nuclear talks are with U.S. efforts to isolate Iran. Messrs.
Obama and Medvedev came to the Czech Republic's capital to sign the most
significant arms control treaty in nearly two decades, hailing what
both called a new chapter of cooperation between the nations.


But before the ink was dry, both men were moving to the next step:
sanctions on Iran. Mr. Obama said "ramped up negotiations" in New York
would move the sanctions forward "in the coming weeks." Washington and
Moscow had set an example for the world, working toward controlling 90%
of the world's nuclear arsenal, and those nations unwilling to follow
their lead needed to be punished, he said.


"We are willing to be bound by our obligations, and we're not asking
any other countries to do anything different," the U.S. president said.

His Russian
counterpart was circumspect in the depths of punishment he would accept,
and with a veto at the U.N. Security Council, Mr. Medvedev carries
weight. The White House is counting on Mr. Medvedev's cooperation to
bring along Chinese President Hu Jintao, whom Mr. Obama meets in
Washington Monday.


"I have outlined our limits for such sanctions, our understanding of
these sanctions, and I said that in making decisions like that, I will
proceed from two premises," Mr. Medvedev said. "First, we need to prompt
Iran to behave properly, and secondly, last but not least, aim to
maintain the national interests of our countries."


One of those interests is the lucrative energy trade Russia maintains
with Tehran. Michael McFaul, the National Security Council's Russia
expert, said energy sanctions were discussed. "Where it ends up I don't
know, but it is not off the table," he said.


But Deputy National Security Adviser Ben Rhodes agreed with Mr.
Medvedev that sanctions should not "bring widespread suffering" to the
Iranian people or be designed to bring down the Tehran regime.


The Iran talks cast a serious light on an event choreographed for
pomp and ceremony. The two leaders signed the nuclear arms control
treaty side by side, seated at an inlaid wooden desk in Prague Castle,
inside a rococo ballroom adorned with gold leaf, dramatic friezes and
imposing, gilt chandeliers. The ceremony came nearly a year to the day
after Mr. Obama appeared in Prague's castle square to lay out his vision
of a world without nuclear weapons.


"It is just one step on a longer journey," Mr. Obama said after the
signing. "As I said last year in Prague, this treaty will set the stage
for further cuts. And going forward, we hope to pursue discussions with
Russia on reducing both our strategic and tactical weapons, including
non-deployed weapons."


The U.S. administration wants to move quickly to the next round of
arms negotiations, which promise to be far more difficult. Those talks
would aim at bringing nuclear-weapons caps to 1,000 or below, and would
include Russia's advantage in tactical "battlefield" nuclear weapons and
the U.S. advantage in mothballed nuclear warheads, still functional but
not counted under the caps because they aren't deployed. Russian
leaders have vowed to go no further unless the United States includes
its missile defense program in the talks.


"I don't think it's the end of the road for arms control with the
Russians," a senior U.S. administration official said.


But both delegations made it clear that the two nations' mutual
interests were broad and not always in sync. The two presidents spoke
extensively about the unrest in the former Soviet republic of
Kyrgyzstan, where protesters and opposition leaders toppled the
government Wednesday.