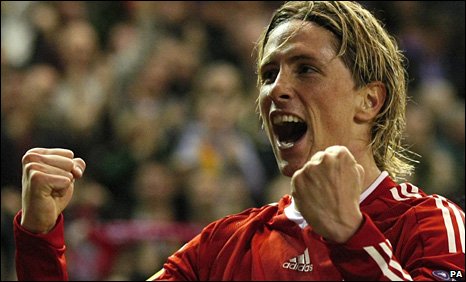 Torres settled Liverpool's nerves with his second
goal of the night

Fernando Torres scored twice to help
Liverpool overpower Benfica at Anfield and set up an Europa League
semi-final clash with Atletico Madrid.
The Reds levelled the
tie on aggregate when Dirk Kuyt met Steven Gerrard's corner and his
header was allowed to stand after initially being ruled out.
Lucas
ran clear to make it 2-0 before Torres added a third on the break.
Oscar
Cardozo's drilled free-kick gave Benfica hope but Torres made sure of
victory late on with a cool finish.

The Spanish
striker can look forward to returning to his former club Atletico in the
last four after keeping alive Liverpool's last hope of silverware this
season but, in the meantime, his side will resume their bid to secure
fourth place in the Premier League with added confidence after an
impressive display.
Torres's eventual contribution more than
justified Rafael Benitez's decision to replace him during Sunday's 1-1
draw with Birmingham to rest a knee injury, but initially he appeared to
be struggling against the Portuguese champions and was in some
discomfort.
At that stage, Benfica were well on top and caused the Reds plenty of
problems in the first 20 minutes with their sharp passing but without
forcing Pepe Reina into action.
Liverpool, however, gradually
imposed themselves on the game and had enjoyed a decent spell of
pressure themselves by the time Kuyt opened the scoring on 28 minutes.
There
was confusion when his header was initially - and wrongly - ruled out
for offside before referee Bjorn Kuipers allowed the goal to stand.
Things
got even better for the home side when Gerrard slid Lucas clear and he
rounded Benfica keeper Julio Cesar before slotting home.
Benfica
were still creating chances but Cardoza's skidding free-kick was
comfortably saved by Reina and Sidnei's shot across the face of goal was
deflected wide.
And Torres gave his side more breathing space
with his first goal of the night just before the hour mark, rounding off
a swift breakaway move by sweeping home Kuyt's superb first-time cross
from the right.
Liverpool were cruising but Cardoza's low
free-kick, which fizzed through a gap in the wall, quickly changed the
mood and left the visitors needing just one more goal to progress on
away goals.
Cardoza came within a few inches of doing just that
when another free-kick from an identical position hit Torres and flew
narrowly wide.
But Torres settled Liverpool's nerves with eight
minutes left when he raced into the area and lifted the ball over
substitute keeper Moreira, who had replaced the injured Cesar moments
earlier.
The Merseysiders now face Atletico, who beat Valencia on
away goals, with the first leg in Spain on 22 April with the return at
Anfield on 29 April.