Obama seeks to change topic, seize initiative in fiscal fights
President Barack Obama told supporters on Monday that he plans to focus his agenda clearly on the economic challenges of the middle class, a theme he will lay out in a speech on Wednesday and follow up with detailed proposals in the coming months 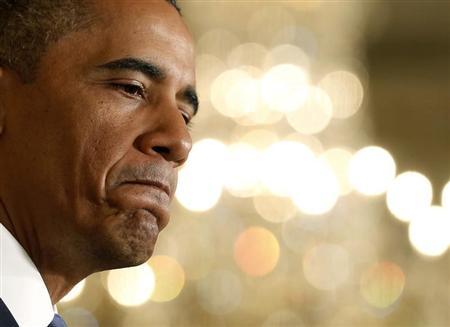 "There is no more important question for this country than how do we create an economy in which everybody who works hard feels like they can get ahead?" Obama told a small group of donors to Organizing for Action, an advocacy group led by some of his former advisers.

"I'm excited about the speech - not because I think the speech is going to change any minds - but because it gives us an opportunity to refocus attention on the thing that the American people sent me to focus on," he said.

The White House started heralding this week's speech - in Galesburg, Illinois - with an email Sunday night from senior advisor Dan Pfeiffer saying he had "just finished reading" a draft and wanted to explain "why it's one worth checking out."

Obama has focused much of his energy in the first six months of his second term on an array of domestic and foreign issues. But on Monday, he told a gathering at a downtown Washington hotel that economic issues would now take priority over others, specifically mentioning gun violence and his plan to address climate change

"So many of the issues that we care about are more likely to progress if people feel good about their own lives and their economic situation," he said.

The White House has been buffeted recently by controversies over surveillance of citizens' phone and Internet activity by U.S. intelligence agencies and Internal Revenue Service targeting of conservatives groups seeking tax-exempt status.

Obama and his advisers have been frustrated with the attention on what spokesman Jay Carney cast as "fake scandals" and want to take back the offensive.

"The key is to try to make sure that this town refocuses on the issues that matter most for people day to day," Obama told supporters, urging them to "amplify" his message around the country.

"Our goal is to lay out a vision and a plan, and then to just keep on pushing, not just legislatively, but across the board, so we're changing the nature of the conversation and focusing on what matters," he said.

The administration also confronts a fiscal deadline on October 1, when spending legislation is needed to keep government programs running. Lawmakers will also need to raise the nation's debt limit, probably in November, to avoid a debt default.

While Republicans, who control the House of Representatives, have not unveiled a coherent strategy for these measures, individual members of the House and Senate have threatened to use them as they have in the past to extract concessions from the White House on spending, and perhaps on Obamacare - the president's signature healthcare law set for launch on October 1.

Congress breaks in August, so there are only four weeks of legislative activity before the government funding deadline.

Obama has pitched some ideas to Congress to grow the economy, including a manufacturing strategy and an infrastructure jobs program, and a hike in the minimum wage.

"Some of the proposals that we put forward are the ones that are going to be very difficult to get through this Congress," he told his supporters.

Obama will give three speeches on the economy this week: one at a port in Jacksonville, Florida, another at an innovative college training program in Warrensburg, Missouri.

But the first speech is in Galesburg, where Obama said he gave the first major economic speech of his political career, as a newly elected senator in 2005.

The town was grappling with the loss of a Maytag refrigerator factory, and Obama has often referred to the experience of meeting with disillusioned workers as he talks about restoring what he calls the "basic bargain" of the American Dream.