It was a creature so outlandish that scientists say it reminds them of the fanciful beasts conjured up by Dr. Seuss. But would the famous children's book author have thought up a marine reptile with a hammerhead snout it used to snack on algae? 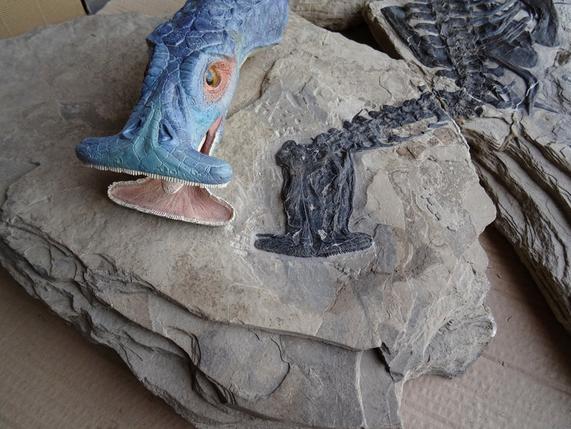 Scientists on Friday announced the discovery in southern China of new fossils of a reptile from 242 million years ago called Atopodentatus that clarify the nature of this strange crocodile-sized, plant-eating sea-dweller.

When the first fossils of Atopodentatus were found in 2014, scientists thought, based on its poorly preserved skull, it had a down-turned snout resembling a flamingo's beak with a vertical, zipper-like mouth. But two new fossil specimens, described in research published in the journal Science Advances, resolved the matter.

"On a scale of weirdness, I think this is up there with the best. It kind of reminds me of some of the Dr. Seuss creations," National Museums Scotland paleontologist Nicholas Fraser said.

Atopodentatus apparently used chisel-like teeth along the edge of its blunt, hammer-shaped snout to scrape algae off hard underwater surfaces. It then quickly opened its mouth to create suction before closing its jaws to filter the plant material through densely packed and needle-shaped teeth much like baleen whales strain tiny shrimp-like krill from seawater.

Atopodentatus, about 9 feet (2.75 meters) long, lived in a shallow sea in China's Yunnan province alongside fish and other marine reptiles, said paleontologist Chun Li of the Chinese Academy of Sciences' Institute of Vertebrate Paleontology and Paleoanthropology.

When thinking of hammerhead creatures, sharks may come to mind. But Atopodentatus' hammerhead feature differed in location and function from the sharks, whose eyes are on the end of lateral extensions on their head.

Atopodentatus appeared during the Triassic Period relatively soon after the biggest mass extinction of species in Earth's history, illustrating that life was bouncing back nicely. Other oddball creatures also swam the seas at the time, including a reptile called Dinocephalosaurus whose neck comprised half of its 17-foot (5.25 meters) length.

"If you saw this reptile (Atopodentatus) in isolation cruising around with some of the fishes of the day, I think you would say it was really quite absurd," Fraser said. "But alongside some of its fellow denizens of the deep, I think it would just appear as one more oddity in a mesmerizing world."

(Reporting by Will Dunham; Editing by Sandra Maler)