Mercury poised for rare 'transit' across sun's face on Monday

Mercury poised for rare 'transit' across sun's face on Monday

Stargazers will have a rare opportunity on Monday to witness Mercury fly directly across the face of the sun, a sight that unfolds once every 10 years or so, as Earth and its smaller neighboring planet come into perfect alignment. 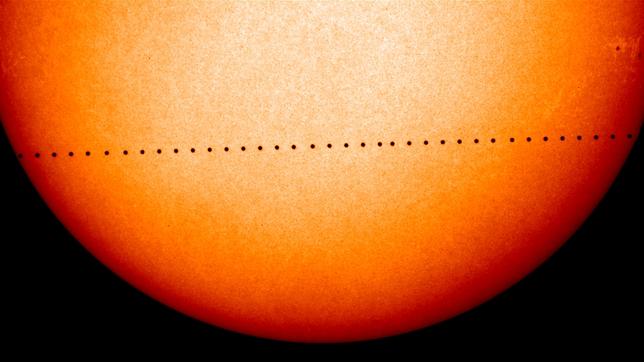 The best vantage points to observe the celestial event, known to astronomers as a transit, are eastern North America, South America, Western Europe and Africa, assuming clouds are not obscuring the sun. In those regions, the entire transit will occur during daylight hours, according to Sky and Telescope magazine.

But Mercury is too small to see without high-powered binoculars or a telescope, and looking directly at the sun, even with sunglasses, could cause permanent eye damage.

Fortunately NASA and astronomy organizations are providing virtual ringside seats for the show by live-streaming images of the transit in its entirety and providing expert commentary.

“Unlike sunspots, which have irregular shapes and grayish borders, Mercury’s silhouette will be black and precisely round,” Sky and Telescope said in a press release.

The event will come into view in the western United States after dawn, with the transit already in progress. The show will end at sunset in parts of Europe, Africa and most of Asia.

NASA Television, available on the Internet, will broadcast live video and images from the orbiting Solar Dynamics Observatory and other telescopes. The show includes informal discussions with NASA scientists, who will answer questions submitted via Twitter using the hashtag #AskNASA.

Other options for armchair astronomers include:

- Slooh.com, which offers live telescope viewing via the Internet, will host a show on its website featuring images of Mercury taken by observatories around the globe.

- Europe’s Virtual Telescope, another robotic telescope network, will webcast the transit at www.virtualtelescope.eu

Scientists will take advantage of Mercury’s transit for a variety of science projects, including refining techniques to look for planets beyond the solar system.

“When a planet crosses in front of the sun, it causes the sun’s brightness to dim. Scientists can measure similar brightness dips from other stars to find planets orbiting them,” NASA said.

Mercury's last transit was in 2006 and the planet will pass between the sun and Earth again in 2019. After that, the next opportunity to witness the event will not come until 2032.