There is an old fisherman in Cuba, Santiago, who has gone eighty-four days without a catch. He is "thin and gaunt with deep wrinkles in the back of his neck,...and his hands had deep-creased scars from handling heavy fish on the cords. But none of these scars were fresh. They were as old as erosions in a fishless desert" (10). Santiago's lack of success, though, does not destroy his spirit, as his "cheerful and undefeated" eyes show (10). He has a single friend, a boy named Manolin, who helped him during the first forty days of his dryspell. After forty days, though, Manolin's parents decided the old man was unlucky and ordered their son to join another boat. Despite this, the boy helps the old man to bring in his empty boat every day. 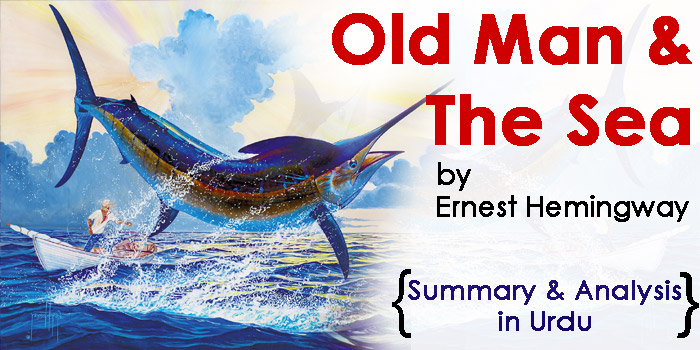 Character List
Santiago
Santiago is the protagonist of the novella. He is an old fisherman in Cuba who, at the beginning of the book, has not caught anything for eighty-four days. The novella follows Santiago's quest for the great catch that will save his career. Santiago endures a great struggle with a uncommonly large and noble marlin only to lose the fish to rapacious sharks on his way back to land. Despite this loss, Santiago ends the novel with his spirit undefeated. Depending on your reading of the novel, Santiago represents Hemingway himself, searching for his next great book; an Everyman, heroic in the face of human tragedy; or the Oedipal male unconscious trying to slay his father, the marlin, in order to sexually possess his mother, the sea.
Manolin
Manolin is Santiago's only friend and companion. Santiago taught Manolin to fish, and the boy used to go out to sea with the old man until his parents objected to Santiago's bad luck. Manolin still helps Santiago pull in his boat in the evenings and provides the old man with food and bait when he needs it. Manolin is the reader's surrogate in the novel, appreciating Santiago's heroic spirit and skill despite his outward lack of success.
The Marlin
Although he does not speak and we do not have access to his thoughts, the marlin is certainly an important character in the novella. The marlin is the fish Santiago spends the majority of the novel tracking, killing, and attempting to bring to shore. The marlin is larger and more spirited than any Santiago has ever seen. Santiago idealizes the marlin, ascribing to it traits of great nobility, a fish to which he must prove his own nobility if he is to be worthy to catch it. Again, depending on your reading, the marlin can represent the great book Hemingway is trying to write, the threatened father of Santiago's Oedipus, or merely the dramatic foil to Santiago's heroism.
The Sea
As its title suggests, the sea is a central character in the novella. Most of the story takes place on the sea, and Santiago is constantly identified with it and its creatures; his sea-colored eyes reflect both the sea's tranquillity and power, and its inhabitants are his brothers. Santiago refers to the sea as a woman, and the sea seems to represent the feminine complement to Santiago's masculinity. The sea might also be seen as the unconscious from which creative ideas are drawn.

albacore
A large pelagic tuna with long pectoral fins.
bodega
A small Hispanic grocery.
bonito
Any of several marine food and game fishes of the genus Sarda, related to the tuna.
coagulate
To congeal, as a fluid.
cumulus
A type of cloud characterized by dense individual elements in the form of puffs, mounds, or towers.
fathom
A nautical measurement equal to six feet.
filament
A long, slender series of attached cells, as in some algae and fungi.
gaff
A large iron hook attached to a pole, used to catch large fish.
gunwale
The upper edge of the side of a boat.
iridescent
Having many lustrous colors like the rainbow.
loggerhead
A rounded post, in the stern of a fishing boat, around which the harpoon line is passed.
mako
A mackerel shark.
oakum
Loosely twisted hemp or jute fiber filled with tar, used in caulking seams and packing joints.
phosphorescence
The persistent emission of light without burning, following exposure to radiations.
plankton
A mass of floating organisms, primarily microscopic algae and protozoa.
rapier
A small sword used for thrusting.
sargasso weed
Any seaweed of the genus Sargassum, commonly known as gulfweed.
scythe
An agricultural tool with a long, curving blade fastened at an angle to a handle.
skiff
A flatbottomed open boat with a pointed bow and a square stern.
tern
An aquatic bird related to a gull but usually with a more slender body and bill, and smaller feet.
ملخص بالعربي لقصة الشيخ والبحر the old man and the sea
[/color]