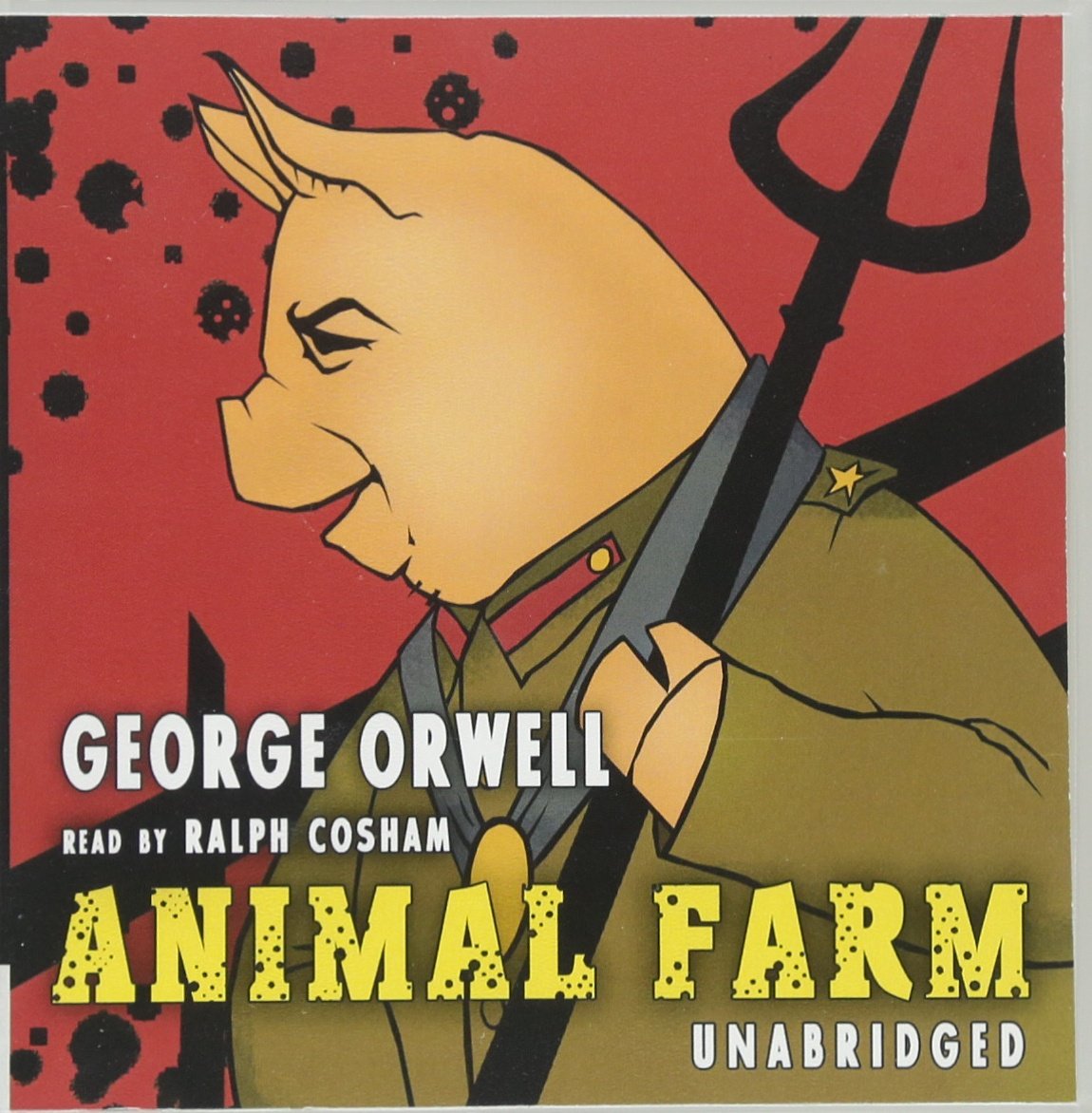 
First: character list of Animal Farm story by George Orwell
Napoleon
The pig who emerges as the leader of Animal Farm after the Rebellion. Based on Joseph Stalin, Napoleon uses military force (his nine loyal attack dogs) to intimidate the other animals and consolidate his power. In his supreme craftiness, Napoleon proves more treacherous than his counterpart, Snowball.

Snowball
The pig who challenges Napoleon for control of Animal Farm after the Rebellion. Based on Leon Trotsky, Snowball is intelligent, passionate, eloquent, and less subtle and devious than his counterpart, Napoleon. Snowball seems to win the loyalty of the other animals and cement his power.

Boxer
The cart-horse whose incredible strength, dedication, and loyalty play a key role in the early prosperity of Animal Farm and the later completion of the windmill. Quick to help but rather slow-witted, Boxer shows much devotion to Animal Farm’s ideals but little ability to think about them independently. He naïvely trusts the pigs to make all his decisions for him. His two mottoes are “I will work harder” and “Napoleon is always right.”

Squealer
The pig who spreads Napoleon’s propaganda among the other animals. Squealer justifies the pigs’ monopolization of resources and spreads false statistics pointing to the farm’s success. Orwell uses Squealer to explore the ways in which those in power often use rhetoric and language to twist the truth and gain and maintain social and political control.

Old Major
The prize-winning boar whose vision of a socialist utopia serves as the inspiration for the Rebellion. Three days after describing the vision and teaching the animals the song “Beasts of England,” Major dies, leaving Snowball and Napoleon to struggle for control of his legacy. Orwell based Major on both the German political economist Karl Marx and the Russian revolutionary leader Vladimir Ilych Lenin.

Clover
A good-hearted female cart-horse and Boxer’s close friend. Clover often suspects the pigs of violating one or another of the Seven Commandments, but she repeatedly blames herself for misremembering the commandments.

Moses
The tame raven who spreads stories of Sugarcandy Mountain, the paradise to which animals supposedly go when they die. Moses plays only a small role in Animal Farm, but Orwell uses him to explore how communism exploits religion as something with which to pacify the oppressed.

Mollie
The vain, flighty mare who pulls Mr. Jones’s carriage. Mollie craves the attention of human beings and loves being groomed and pampered. She has a difficult time with her new life on Animal Farm, as she misses wearing ribbons in her mane and eating sugar cubes. She represents the petit bourgeoisie that fled from Russia a few years after the Russian Revolution.

Benjamin
The long-lived donkey who refuses to feel inspired by the Rebellion. Benjamin firmly believes that life will remain unpleasant no matter who is in charge. Of all of the animals on the farm, he alone comprehends the changes that take place, but he seems either unwilling or unable to oppose the pigs.

Muriel
The white goat who reads the Seven Commandments to Clover whenever Clover suspects the pigs of violating their prohibitions.

Mr. Jones
The often drunk farmer who runs the Manor Farm before the animals stage their Rebellion and establish Animal Farm. Mr. Jones is an unkind master who indulges himself while his animals lack food; he thus represents Tsar Nicholas II, whom the Russian Revolution ousted.

Mr. Frederick
The tough, shrewd operator of Pinchfield, a neighboring farm. Based on Adolf Hitler, the ruler of Nazi Germany in the 1930s and 1940s, Mr. Frederick proves an untrustworthy neighbor.

Jessie and Bluebell
Two dogs, each of whom gives birth early in the novel. Napoleon takes the puppies in order to “educate” them.

Minimus
The poet pig who writes verse about Napoleon and pens the banal patriotic song “Animal Farm, Animal Farm” to replace the earlier idealistic hymn “Beasts of England,” which Old Major passes on to the others.

Second: the analysis of the major characters in Animal Farm by George Arwell

Characters Napoleon
From the very beginning of the novella, Napoleon emerges as an utterly corrupt opportunist. Though always present at the early meetings of the new state, Napoleon never makes a single contribution to the revolution—not to the formulation of its ideology, not to the bloody struggle that it necessitates, not to the new society’s initial attempts to establish itself. He never shows interest in the strength of Animal Farm itself, only in the strength of his power over it. Thus, the only project he undertakes with enthusiasm is the training of a litter of puppies. He doesn’t educate them for their own good or for the good of all, however, but rather for his own good: they become his own private army or secret police, a violent means by which he imposes his will on others.

Although he is most directly modeled on the Soviet dictator Joseph Stalin, Napoleon represents, in a more general sense, the political tyrants that have emerged throughout human history and with particular frequency during the twentieth century. His namesake is not any communist leader but the early-eighteenth-century French general Napoleon, who betrayed the democratic principles on which he rode to power, arguably becoming as great a despot as the aristocrats whom he supplanted. It is a testament to Orwell’s acute political intelligence and to the universality of his fable that Napoleon can easily stand for any of the great dictators and political schemers in world history, even those who arose after Animal Farm was written. In the behavior of Napoleon and his henchmen, one can detect the lying and bullying tactics of totalitarian leaders such as Josip Tito, Mao Tse-tung, Pol Pot, Augusto Pinochet, and Slobodan Milosevic treated in sharply critical terms.

Characters Snowball
Orwell’s stint in a Trotskyist battalion in the Spanish Civil War—during which he first began plans for a critique of totalitarian communism—influenced his relatively positive portrayal of Snowball. As a parallel for Leon Trotsky, Snowball emerges as a fervent ideologue who throws himself heart and soul into the attempt to spread Animalism worldwide and to improve Animal Farm’s infrastructure. His idealism, however, leads to his downfall. Relying only on the force of his own logic and rhetorical skill to gain his influence, he proves no match for Napoleon’s show of brute force.

Although Orwell depicts Snowball in a relatively appealing light, he refrains from idealizing his character, making sure to endow him with certain moral flaws. For example, Snowball basically accepts the superiority of the pigs over the rest of the animals. Moreover, his fervent, single-minded enthusiasm for grand projects such as the windmill might have erupted into full-blown megalomaniac despotism had he not been chased from Animal Farm. Indeed, Orwell suggests that we cannot eliminate government corruption by electing principled individuals to roles of power; he reminds us throughout the novella that it is power itself that corrupts.

Characters Boxer
The most sympathetically drawn character in the novel, Boxer epitomizes all of the best qualities of the exploited working classes: dedication, loyalty, and a huge capacity for labor. He also, however, suffers from what Orwell saw as the working class’s major weaknesses: a naïve trust in the good intentions of the intelligentsia and an inability to recognize even the most blatant forms of political corruption. Exploited by the pigs as much or more than he had been by Mr. Jones, Boxer represents all of the invisible labor that undergirds the political drama being carried out by the elites. Boxer’s pitiful death at a glue factory dramatically illustrates the extent of the pigs’ betrayal. It may also, however, speak to the specific significance of Boxer himself: before being carted off, he serves as the force that holds Animal Farm together.

Characters Squealer
Throughout his career, Orwell explored how politicians manipulate language in an age of mass media. In Animal Farm, the silver-tongued pig Squealer abuses language to justify Napoleon’s actions and policies to the proletariat by whatever means seem necessary. By radically simplifying language—as when he teaches the sheep to bleat “Four legs good, two legs better!”—he limits the terms of debate. By complicating language unnecessarily, he confuses and intimidates the uneducated, as when he explains that pigs, who are the “brainworkers” of the farm, consume milk and apples not for pleasure, but for the good of their comrades. In this latter strategy, he also employs jargon (“tactics, tactics”) as well as a baffling vocabulary of false and impenetrable statistics, engendering in the other animals both self-doubt and a sense of hopelessness about ever accessing the truth without the pigs’ mediation. Squealer’s lack of conscience and unwavering loyalty to his leader, alongside his rhetorical skills, make him the perfect propagandist for any tyranny. Squealer’s name also fits him well: squealing, of course, refers to a pig’s typical form of vocalization, and Squealer’s speech defines him. At the same time, to squeal also means to betray, aptly evoking

Characters Old Major
As a democratic socialist, Orwell had a great deal of respect for Karl Marx, the German political economist, and even for Vladimir Ilych Lenin, the Russian revolutionary leader. His critique of Animal Farm has little to do with the Marxist ideology underlying the Rebellion but rather with the perversion of that ideology by later leaders. Major, who represents both Marx and Lenin, serves as the source of the ideals that the animals continue to uphold even after their pig leaders have betrayed them.

Though his portrayal of Old Major is largely positive, Orwell does include a few small ironies that allow the reader to question the venerable pig’s motives. For instance, in the midst of his long litany of complaints about how the animals have been treated by human beings, Old Major is forced to concede that his own life has been long, full, and free from the terrors he has vividly sketched for his rapt audience. He seems to have claimed a false brotherhood with the other animals in order to garner their support for his vision.

Characters Mr. Pilkington
Mr. Pilkington is the owner of Foxwood, a farm near Animal Farm. He is introduced as “an easy-going gentleman farmer who spent most of his time in fishing or hunting according to the season” (Chapter 4). In other words, he is more interested in doing what he enjoys than in running his farm. As a result, Foxwood is “neglected, old-fashioned” (Chapter 4). Within Animal Farm’s allegory of Soviet Communism, Foxwood represents the United Kingdom, and Mr. Pilkington represents the British ruling class. Animal Farm therefore suggests that Britain is an old-fashioned country, badly run by self-serving aristocrats. This criticism of Britain’s rulers deepens when Mr. Pilkington eats dinner with the pigs in the novella’s final chapter. Mr. Pilkington congratulates Napoleon on his cruel efficiency. He jokes: “If you have your lower animals to contend with […] we have our lower classes!” (Chapter 10). This moment crystallizes the novella’s argument that Soviet totalitarianism and British capitalism are essentially the same: cruel and exploitative.

Characters Benjamin
Benjamin is Animal Farm’s donkey. He is intelligent and able to read, but he “never exercised his faculty. So far as he knew, he said, there was nothing worth reading” (Chapter 3). He is the only animal who never really believes in the rebellion, but he doesn’t oppose it, and he doesn’t oppose Napoleon’s rise to power either. When the animals ask him to help them by reading the Commandments which have been changed on Napoleon’s orders, Benjamin refuses “to meddle in such matters” (Chapter